09 Nov Around Bogotá, the city structure

Posted at 18:19h in Around Bogota, Bogota by yourcolombia 0 Comments
0 Likes
Share

Around Bogotá: The city structure of Bogotá – streets, avenues

Bogotá’s structure is very logical (in most parts of the city). The city lies on a 2600 m plateau. The city expands towards the North, South and West, it is surrounded by 3000 m high mountains from the East. The streets (calle) and avenues (carrera) are named – starting from the city center in ascending order – by numbers. The avenues are parallel with the North-South direction and the streets are perpendicular to it. It’s easy to navigate around the city this way, as regards to the directions and distances. You can see the system easily on the Google map below: 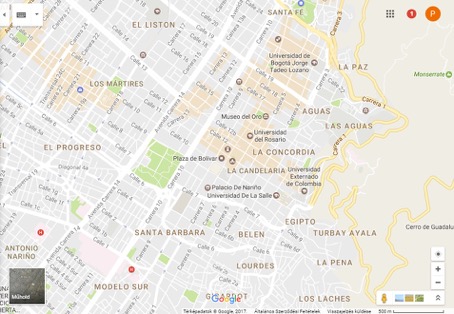 Around Bogotá – Pedestrian and bicycle traffic

There are not a lot of pedestrians; I am an exception from that since I walk the nearly 4 km distance almost every day between my office and my apartment. There are few pedestrians at night, it is much more practical and comfortable to get a taxi or uber at this time than to walk around.

Bicycle traffic is pretty good in the city, a lot of people commute to work by bike; the city has hundreds of kms of bicycle roads.

Colombia isn’t one of the most popular tourist destinations because most people think of 2 things when they think of Colombia: the bloody crimes and cocaine. 20 years ago this might have been true, maybe even 15 years ago. But in the last 10 years, drastic changes have started to come about and even though we’re not talking about European level security, if you accept “the rules” you will enjoy yourself immensely and will be able to travel around without having to be particularly brave.

What rules am I talking about?It’s not anything new or surprising:

It also feels nice that just because you’re a tourist, they won’t try to scam you, in reality Colombians are rather happy to help out any foreigner, be it a street vendor, police officer or banker that you ask for help.

In Colombia, they grade zones from 1 to 6 (estratos), which are officially approved by the government (social-economic zones). 1 counts as the worst, 6 counts as the best. So what does it all mean? People pay their utility bills based on which “estrato” they live in. There are huge differences – they are multiplied between the number 1 and 6 zones. People living in zones 1, 2 and 3 receive free public education, get discounts for public transport and also receive free social security (don’t think of high quality health care though). It’s not uncommon in Latin America that right next to an estrato 1, there is an estrato 6. The price of real estate also changes according to which zone it’s in. The map below shows the different zones in Bogotá: 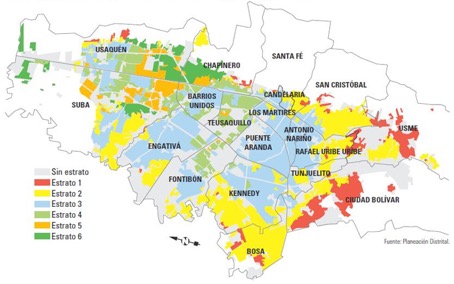 As a European, it’s surprising and interesting that every buildings in estratos 4-5-6 have a doorman service. You can’t just walk into any building, not even with a key or a code. If you want to invite a guest over you have to let the doorman know and he will let them in. They don’t even let pizza delivery guys in, they let you know over the phone that your pizza has arrived. This is due to the previously horrible public safety – people find safety to be very important to this day, since they haven’t had it for so long.

Sorry, the comment form is closed at this time.

This website uses cookies to improve your experience while you navigate through the website. Out of these cookies, the cookies that are categorized as necessary are stored on your browser as they are essential for the working of basic functionalities of the website. We also use third-party cookies that help us analyze and understand how you use this website. These cookies will be stored in your browser only with your consent. You also have the option to opt-out of these cookies. But opting out of some of these cookies may have an effect on your browsing experience.
Necessary Always Enabled
Necessary cookies are absolutely essential for the website to function properly. This category only includes cookies that ensures basic functionalities and security features of the website. These cookies do not store any personal information.
Non-necessary
Any cookies that may not be particularly necessary for the website to function and is used specifically to collect user personal data via analytics, ads, other embedded contents are termed as non-necessary cookies. It is mandatory to procure user consent prior to running these cookies on your website.
SAVE & ACCEPT